Originally written and posted on www.blueshoe.net 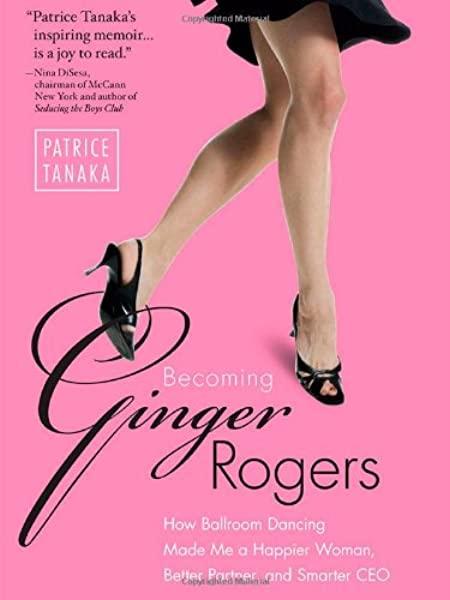 I like to begin every year by reviewing a business book written by a woman who I think presents something other than to-do lists for building a brand or a stairway to success. “The 7 Habits of Highly Successful People” notwithstanding, (yes, I read it, but as of a few years later, I only remember two of the habits, which doesn’t make me feel good about myself at all), I love a business primer that has a beginning, a middle, and an end. Enter “Becoming Ginger Rogers,” by the PR magician who has a reputation that makes her PR royalty, Patrice Tanaka.

I need to provide full disclosure: I know Patrice, but as I imagine so many people would say, I don’t really know her. We’ve met maybe five times, which might be a gross exaggeration, but we have kept in touch, because she is like that, and I know that when I do speak with her, she sees me and hears me and I feel as if there is nowhere else she would rather be. So we are not exactly friends, but if I call, she will pick up the phone and greet me as if we were. You need people like her in your life.

Enough about me and her. Let’s find out why “Becoming Ginger Rogers” matters.

Patrice’s claims to fame in the PR arena are well-known and well documented throughout the book. So many lessons. My personal favorite is the Liz Claiborne domestic violence campaign, which not only put Liz Claiborne on the map as a supporter of women, it also laid the groundwork for why and how companies should take on a cause to give their brand a statement that allows them to be more than whatever they are selling. Groundbreaking work by PT&Co. And the Dyson Cyclone vacuum campaign launch in America that puts to shame Patton’s march to wherever? Pure gold. Oh, the stories she can tell! Fabulous.

PT&Co., Patrice’s company, clearly paved new roads to what PR can do. But it’s the company’s difficulty ramping itself that is the hidden gem in the book. The lesson takeaway that makes it a good read. Huddle up. Here’s why you must buy this book and read it and reread it (the latter of which I have done over the last month since I neglected to write this review when I finished it the first time, toward the end of October. As you can imagine, I was so shaken by the politics of my nation, I just couldn’t focus on anything else until a week or so ago.) It contains valuable life lessons, company lessons, and personal-growth lessons, and it gives clarity to what we’re all trying to accomplish for ourselves and our companies.

Never have I come across a CEO — active or retired — who is as honest or without prejudice as Patrice is in her memoir about the successes and failures of her journey in business. It is her gift in giving us the opportunity to view her and PT&Co. without a filter. God, she is good at analyzing what went right in their building of their stable of clients, but perhaps more importantly, she is willing to share what went wrong and her part in that as well. The life lessons we gain as a result of her vulnerable raw assessment is the best PR campaign of her life. I thank you, Patrice, for showing me how to avoid looking through rose-colored glasses and how to tastefully, kindly tell the truth about what works and what doesn’t in my business niche.

Let’s get the dancing out of the way. I do not want to become Ginger Rogers, and I knew that before I read the book. In fact, if I have one criticism, it’s that the title doesn’t do the content justice. Not that Ginger Rogers wasn’t a great dancer, and not that I don’t get the point of Patrice’s quest to be the best dancer she could be, and all the lessons she learned along the way beyond step, slide — one, two, three, which gave her an outlet and a JOY (she is all about joy in her life after PR) that was missing from her life. But what the foxtrot brings out in a person versus that of the tango (I have often found the tango a little too voyeuristic — like I’m watching two people doing something that should be done in private) would not be a reason for me to read her book. However, it fits. It works. It’s not an interlude; it’s an analogy for the business lessons she puts forth — an appendix, if you will, and an entertaining one. And, more than that, there are business lessons in her quest to be Ginger that have clarity because of dance. What a read.

PT&Co. was not lucky in the time when it launched. They made it through the 2000 dot-com bust, which they weren’t that worried about because they didn’t have tech companies per se. But the 2001 recession and then 9/11 and the large overhead for the perks and sustenance the company put forth for their teams must have become a weight too great. What did Patrice do? She danced. She left work a few times a week, and she went and danced. Then she dealt with the stress that 2020 has brought to us all. I think her descriptions of that time are so relevant to the lives we are all leading now — to being open to versatility in making sure we are not cemented in a business environment that worked in 2019, but died in 2020. Because of this book, I’ve recently begun spending time each day not working or figuring out challenging answers for my clients, but instead doing something that gives me joy and a sense of self outside business. Yes, Patrice was a workaholic, and becoming Ginger Rogers was the cure. I’m all in, girlfriend. Thank you.

Patrice defines public relations two decades ago in a way that is critical to deciphering what social media is doing today to replace PR. Is social media replacing PR? Is there a place for PR in today’s world? She notes, “If the goal of public relations is to obtain a high amount of visibility at a fraction of the cost of advertising …”. Sounds like social media to me, or part of it. Is social media the new public relations vehicle? Shouldn’t it replace the old vehicles, or are both necessary? I am surprised today in observing the way PR firms still approach placement, which to me is comparable to Blockbuster (a dinosaur) versus Netflix. Reading Patrice’s strategic thinking behind Food Network’s brand building and PR campaigns has given me new visionary certainty to my own approach for 2021 and our brands. PR is part of a company’s social media strategy. Even the term public relations will disappear, I believe, just like Blockbuster did from every corner. Patrice’s storytelling about her PR thinking for getting brands to the right constituency serves as a textbook layout for how to build a brand in 2021. So while she doesn’t specifically address social media, it’s easy to read between the lines and see its transition into the new world in which we live.

Enough about the PR. Back to building a company.

There is a part of “Becoming Ginger Rogers” that should be taught in entrepreneurship courses at Wharton. It has nothing to do with ballroom dance or PR. It’s what alludes the successful growth of so many companies. Women-owned businesses, huddle up. The way to build a company that you can feel good about, that doesn’t take advantage of those employees who have no voice in the development of the company but have a vested stake in how it’s built is laid out in Patrice’s book. This is where Patrice shares the lesson of a lifetime. She explains the mistakes she made, some of which she can’t be proud to reveal, but does anyway. I believe she does it to teach, which is clearly her true calling. Since she holds back nothing when she describes the mistakes she made along the way, we don’t have to make the same ones moving forward. Take note. As I mentioned earlier, I have yet to find a CEO, present or past, who has as much courage in self-assessment as Patrice exhibited in her telling of the PT&Co.

“I was very good at the client service piece of public relations but not so good at running a profitable business. Some of the biggest mistakes we made at PT&Co. were the direct result of my laser-like focus on doing great work, no matter what it took,” Patrice reveals in the book. It’s the scenario that limits so many women growing businesses — the inspiring visionary who sets up an amazing company and then can’t sustain it as it grows. “Becoming Ginger Rogers” will teach you how to avoid the potholes that can swiftly knock even the best of us off track. Her mistakes are my mistakes. Her strengths mirror some of my own. It was such a pleasure and a gift to read about challenges we’ve all experienced that can be avoided on the path ahead. Now. In 2021.

Here is one example. As the head of a small agency, Patrice wanted the founding team members to feel powerful. Each was given the title of president. However, Patrice had veto power, and when things became challenging, regardless of the whys, which had nothing to do with the acumen of the team, she had to use it. She fired people who had invested as much as she had. She lays it all out, page after page, without once being defensive or even apologetic. She just tells the story as it occurred.

And like all good teachers, Patrice doesn’t spell out the lessons in her book. You have to read the pages slowly, marinate in each chapter before moving on to the next, because the lessons are embedded in the stories of what actually occurred, like they are in a crime novel. All the clues are there. She doesn’t leave any out, so that you may discover them for yourself.

There is some diversionary messages in the book as well. Like women and weight; body image and weight shaming and our own personal quest to be less self-critical of how our bodies look and move. Again, Patrice lays it out sans filter, telling the story of our weight struggles in our everyday experiences. The very day after I finished the book, I purchased a sweater in the right size. I haven’t worn it yet, but then again, I haven’t gone anywhere since March 2020.

I will end with something Patrice wrote about dance competition: “There are many reasons that trying to dance the routine on your own without following your partner’s lead is a bad idea, aside from the fact that the judges will penalize you for it. … A couple will look clunky and out of sync if both partners are trying to lead.” I know this is also true in business. And while my experience was foggy to me, her description of leading in dance really clarified it. I must lead my company and stop pretending I’m not doing so. It also pointed out to me that, as in most things business, competitive ballroom dance is all about the man being in charge and we women following. I wonder what the tango would look like with the woman leading. I’d like to see that. Damn!