Originally written and posted on pitchengine.com 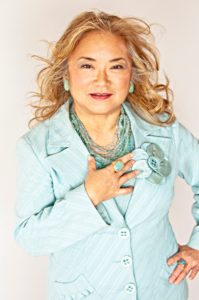 Patrice Tanaka, Founder & Chief Joy Officer of Joyful Planet, was recently seen on Bravo and A&E in major markets coast to coast as a guest on Hollywood Live.

New York, NY – March 20, 2018 – Patrice Tanaka, Entrepreneur, was recently a featured guest on Hollywood Live. The show, which filmed at the Hollywood Roosevelt Hotel in Los Angeles, California by an Emmy Award-winning crew, was hosted by Jack Canfield, Best-Selling Author® and co-creator of Chicken Soup for the Soul. The show included guests from around the country who shared their expertise and stories of their success. Tanaka was one of the guests on the show, discussing the importance of living your life’s purpose to unleash greater success, fulfillment and joy.

Hollywood Live, filmed in Los Angeles, is produced by The Dicks and Nanton Celebrity Branding Agency®. The episode featuring Tanaka recently aired on Bravo and A&E in major markets coast to coast.

About Patrice Tanaka:
Patrice Tanaka is a serial entrepreneur, having co-founded three award-winning, PR and Marketing firms and, most recently, Joyful Planet, a Business and Life Strategy Consultancy to help individuals and organizations discover and actively live their purpose to unleash greater success, fulfillment and joy in their personal lives, their businesses and their communities. “Through Joyful Planet, I am doing what I love and what I do best, leveraging my creative, problem-solving talent to help individuals and organizations move forward more successfully and joyfully in business and life,” says Patrice.

Joyful Planet is the culmination of Patrice’s experience and award-winning track record in creative problem solving for some of the most successful global brands. The only reason I started my first PR agency, PT&Co., was to avoid firing four talented colleagues when we lost our biggest account, explains Patrice. The best solution I could come up with was to lead my colleagues in a management buyback from advertising agency, Chiat/Day, to co-found an employee-owned PR agency in 1990. Within eight years, PT&Co. was recognized as the “#1 Most Creative” and the “#2 Best Work Environment” among all PR agencies in the U.S.

Prior to starting Joyful Planet, Patrice was Co-Founder, Chief Counselor and Creative Strategist for PadillaCRT, the largest employee-owned PR agency, and the 15th largest independent PR agency in America. “I am proud to have been part of co-founding a purpose-driven agency committed to helping clients achieve their business purpose,” Patrice says. Previously, she was Co-Chair, Chief Creative Officer and whatcanbe Ambassador for CRT/tanaka, an entity she helped co-found in September 2005 with Richmond, VA.-based Carter Ryley Thomas.

Born and raised in Hawaii, Patrice graduated from the University of Hawaii in 1974, became an editor at Hawaii Press Newspapers and, following that, PR Director of the Hotel Inter-Continental Maui in Wailea. In 1979, she fulfilled a life-long dream of moving to New York City. Patrice joined Jessica Dee Communications, a PR agency she helped to build, which was acquired by Chiat/Day Advertising in 1987.

A widow since 2003, Patrice lives in Manhattan. She devotes much of her free time to serving on the boards of non-profit organizations dedicated to helping women and children, including the Girl Scouts of Greater New York, Dancing Classrooms, and the American Friends of Phelophepa (the South African health care train). Patrice is also a ballroom dancer and author of Becoming Ginger Rogers…How Ballroom Dancing Made Me a Happier Woman, a Better Partner and a Smarter CEO (2011).

If you would like to learn more about Patrice Tanaka and her services, connect with her at: www.JoyfulPlanet.com