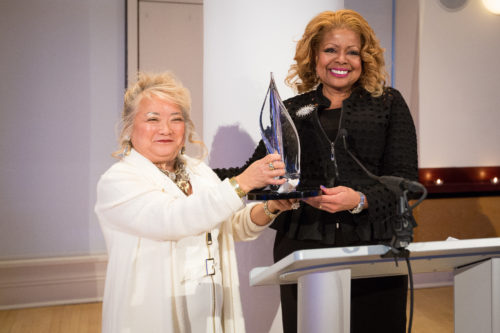 Patrice Tanaka and Judith Harrison at the Paladin Awards

Patrice Tanaka was honored recently with the PRSA Foundation’s 2017 Paladin Award, which recognizes courage in the pursuit of worthy causes. In her well-received remarks, Tanaka stressed the need for diversity and inclusion and creating community as a way to achieve this.

Judith Harrison, President of the PRSA Foundation, said “Patrice’s career is a tribute to the power of creativity, insight and advocacy. Her work throughout her career embodies the spirit of the ‘paladin,’ an advocate of noble causes in medieval times.” She called Tanaka “a model and inspiration for us all.”

The presentation took place on June 1 at the Helen Mills Event Space in New York City.

Tanaka is the co-founder of three highly regarded PR agencies, PT&Co., CRT/Tanaka and PadillaCRT, now called Padilla. Since leaving Padilla in late 2015, she started  Joyful Planet, a consultancy focused on helping individuals and organizations discover and live their purpose to unleash greater success and joy in their personal lives, their workplaces and their communities.

PRSA Foundation’s singular mission is to increase diversity and inclusion

“We help educate and empower rising diverse talent with the potential to become the next generation of leaders in a rapidly changing business,” she said.

Harrison noted that “43 percent of millennials are diverse” – the highest percentage of any generation – and that “47 percent consider diversity and inclusion to be the determining factors in where they will work.”  She continued, “We know that a diverse workforce operating in an inclusive environment is a key driver in innovation, a critical component of being successful on a global scale, and a necessity for companies that want to attract and retain top talent.”

She went on, “We know that companies with diverse executive boards significantly outperform their peers and enjoy higher earnings and returns on equity and yet, with nearly $3.5 trillion of minority buying power in this country, 91 percent of the top 100 chief marketing officers in the US are white. In 2014 only 8.7 percent of people in our business were black and 10.7 percent were Hispanic.

“From a purely logical perspective, this is unfathomable,” Harrison said. “If we are going to communicate with diverse stakeholders in ways that are authentic, resonant and relevant, it is imperative that we treat ramping up diversity in our industry as an urgent, hair-on-fire emergency.”

Harrison declared with passion, “There is no excuse for the paucity of minorities in public relations. We cannot wait for the situation to right itself someday.  We may have created this situation unconsciously, but we will have to be fiercely intentional to change it.”

Foundation’s Mission is More Important than Ever

In her acceptance speech, Tanaka said, “We live in a country where ‘diversity and inclusion’ are not the ‘norm’ everywhere. And, we live in a time when some people feel freer to be verbally and physically abusive to those who are different.”

She said, “I was born and raised in Hawaii – a place rich in the diversity of its people.  And, to me, this is the ‘norm.’ 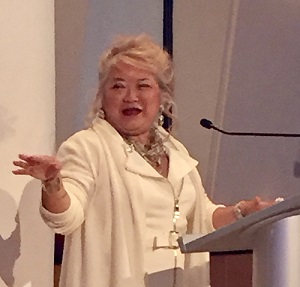 Patrice Tanaka at the Paladin Awards

Tanaka Grew Up in Hawaii, a “Close” Community

“Growing up on a tiny island in the middle of the Pacific, I was always acutely aware of living in a very close – almost “too close” of a – “community” where everyone seemed to know everyone.

“ ‘Good’ because, if something bad happened to anyone, the community banded together to support them. When our elderly neighbor’s husband died, my mom and dad took hot meals to her for an entire year until she moved away.

“The ‘bad’ of a ‘too close’ community like Hawaii,” explained Tanaka, “is that everyone knows everyone’s business. In Hawaii, for example, you would never use your car horn to signal impatience, like we do routinely here in NYC, because, if you turned around to determine who that rude person was honking at you it might be your neighbor or your neighbor’s cousin. And word would spread about how ‘rude’ you were! Or, as we say in Hawaii, ‘people would talk stink about you.’  And, your reputation would be ruined.

“One of the reasons I moved to New York City, Tanaka said, “was that I loved the idea that you could live ‘anonymously’ in a city of millions of people where no one knew you or your personal business.

And, if you didn’t like someone or something they said, you could be direct and vocal about your displeasure – something you’d never do in Hawaii.

Creating “community” in the workplace

“The irony of ironies, Tanaka explained, “is that ever since I “ran away from”/ moved to NYC, I’ve tried to create a sense of “community” in every area of my personal and professional life.

“First and foremost was creating a sense of ‘community’ at work because we spend so much time there. I intuitively realized that ‘to feel safe and be able to perform at your best’ you need to be part of a community that embraces and celebrates you – the whole person!”

Tanaka said, “My goal was to have employees feel comfortable bringing their whole self into the office not just their “professional” self.

“Google recently did an exhaustive study to net out that the secret to ‘high-performing teams’ is something they termed, ‘psychological safety,’ which makes total sense,” she said. 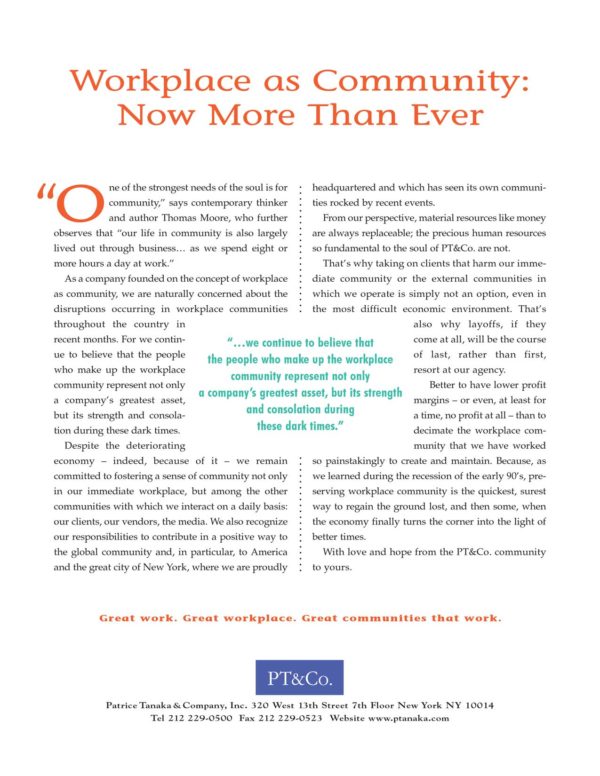 Workplace as Community ad from PT&Co.

“Creating a sense of community at work was not just ‘altruism.’  It addressed my own personal need to feel a sense of ‘belonging and safety’ in a city far from home,” Tanaka explained.

“I felt so strongly about the idea of a ‘workplace community’ that I articulated it in a ‘business purpose’ for my first PR agency, PT&Co., which I co-founded with 12 colleagues after leading them in a management buyback from Chiat/Day (now TBWA\Chiat\Day) in 1990.

A Business Purpose Focused on Community

“The business purpose I articulated was, ‘PT&Co. is committed to creating: Great work. Great workplace. Great communities that work.’

“Great communities that work, i.e., healthy, sustainable communities, because…top talent wants to engage in meaningful work. They want their work to make a positive impact on society, which we invited them to do at PT&Co.”

Tanaka said, “I believe that clearly articulating our ‘business purpose’ – and institutionalizing our commitment to community – was the reason PT&Co. was recognized as the #1 Most Creative Agency and at the same time the #2 Best Workplace among all PR agencies in the U.S. shortly after our founding. And the reason we were also recognized as the #1 Most Esteemed PR Agency in NYC.

“I believe that ‘institutionalizing’ a commitment to ‘community’ is key to fostering diversity and inclusion and a ‘collaborative’ workplace environment,” she said, “which research bears out has a hugely positive impact on business results.

“We all know, first-hand, that the workplace is where friendship and trust can be forged among people of different ethnicities, sexes, sexual orientation, age, abilities, religious beliefs and even political persuasions.

“Many of my dearest friends like Pablo Olay from Padilla, who introduced me tonight, are those I’ve worked with at my former agencies.

“Another very dear agency friend of nearly 30 years,” she said, “recently helped to elect our current President…but our friendship has weathered this storm and continues to remain strong and close today.

Tanaka continued, “I believe that great workplace communities, which perforce reflect diversity and inclusion, can help our divided country come together.

“And, at this time in America, businesses must take the lead in embracing diversity and inclusion.

“Moreover, getting diversity and inclusion right within the PR industry positions us as experts on communicating with diverse audiences and further reinforces the role of PR as a vital business function.

“I know I’m preaching to the choir here. So, I’ll end by saying, thank you so much for this recognition.  I am deeply touched, hugely grateful and extremely proud to be a member of the PR community.